When most people think of war veterans, they don’t usually picture them playing South East Asian gongs. But visitors to a project in London last week may have a different view. In October, 16 veterans and their family members came together at Stoll Mansions in Fulham, to make music for a week, using the gamelan orchestra from Indonesia. They played traditional pieces, composed, improvised, and conducted, despite the fact many had never played an instrument before. And on the final day, the group put on a concert.

“I’m in awe of this music, the instruments, how beautiful they are. I feel a reverence towards them because they belong to people from the past.”

This was a project run by national charity, Good Vibrations, in partnership with Stoll, and funded by ABF – The Soldiers’ Charity.

“I suffer from Post-Traumatic Stress Disorder, and I take a lot of tablets and fight to get out of bed. Music for me is part of my life. I rely on it for my daily survival … Then I came down here. I’d heard the music before – I’d been in the Far East as a soldier and I’d always wanted to try it … But I didn’t think I would feel like this because I’ve done so many different things, and I’m like “yeah, yeah, yeah, next ting”, but this thing, can I do some more? That’s how I feel.”

Many UK veterans have faced tougher realities than others could ever imagine – and their experiences from life in the armed service leaves an imprint behind. While Good Vibrations does not claim to heal these wounds or act in place of vital mental health support services, their projects offer a creative space to allow people to self-reflect, interact with others, and explore their own potential for life ahead. And it really works. The testimonies speak for themselves:

“What I loved about it was the companionship … I’m not musical myself but I ended up loving every minute of it. It was a joy. My daughter come to me and she said, ‘Mummy, you must try it, it’s so different – you sort of blossom.’ And it’s true, you do.”

“It is wonderful to be here. Ok, the old body’s tired, but it didn’t really matter because I got so much from it. We lose a lot, and if we take something positive in, in our stressful day, it helps us.”

“What I liked was that they were non-judgemental. On my first day, in certain pieces I would make bits of mistakes, but John said, “There are no mistakes in gamelan.” And it’s so true.”

Good Vibrations’ is backed by the patronage of retired army officer Lord Ramsbotham, and popular comedian, Bill Bailey, and has been the subject of numerous pieces of academic research since 2006. But the charity needs your help to keep providing this impactful service to vulnerable people. One way you can support is to take part in the Bill Bailey Fundraising Competition. The idea is for members of the public to raise money for Good Vibrations as imaginatively as possible, and entries will be judged in December by a professional panel, including Guardian writer Erwin Jones. 1st, 2nd and 3rd place winners will receive pairs of tickets to Bill Bailey’s 2018 comedy tour, Bill-Bailey signed certificates, and the knowledge of a fantastic deed done. 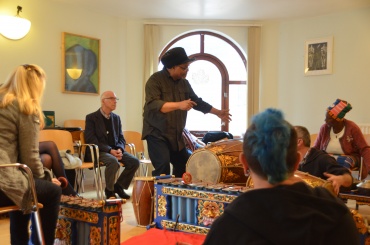