Akin, former resident of a ‘foreign national’ prison, on the importance of knowing your rights

No. 12 in our blog series exploring creative approaches to transforming the criminal justice system.

Akin spent the last two years of his criminal sentence in a ‘foreign national’ prison. He moved to the UK from Nigeria as a child and has siblings who were born in the UK. In this interview he speaks about his own experience as well as the stories of other people he met and supported while in prison, many of whom were detained for months post-sentence because they were unable to secure bail accommodation or could not afford legal representation. Interview by AVID.

Tell us a bit about yourself.

I’m 42, and came from Nigeria when I was a baby. I’ve been in England forever; for nursery, primary, secondary, the lot.

Did you expect to move to a Category D open prison for the end of your sentence?

Yes. You do a sentence plan to get to open prison and I had done everything required. At first, everyone signed off, and then, literally like the day before the board, I got a slip saying ‘you’re of interest to the Home Office’.

How did you feel about being moved to a ‘foreign national’ prison?

I’ve never known anything apart from England. So you’re telling me I’m a foreign national? Yes, we’ve done a crime, but people who have committed the same crime as me and are born here can go to open prison, but I couldn’t go. What is the difference?

There was a lot of young people there just like me, who have been here since they were kids. A lot of them feel betrayed because they love England. They say, ‘I’m British I don’t care what you tell me.’ If you’ve been here since you were six months old, how can you say anything else?

How is a ‘foreign national’ prison different to another UK prison?

People get stressed and frustrated as they don’t know what is happening in their case, or why they are being held post-sentence and there’s a lot more fights.

What was your experience of risk assessments in a ‘foreign national’ prison?

I’ve always been low-risk but when I arrived at the ‘foreign national’ prison they told me I was high risk. Luckily, I’d done my OASys [risk assessment] before I got there and got my solicitor to send them a copy.

A lot of people who get a lesser sentence don’t spend enough time in a UK prison to lower their risk. In a ‘foreign national’ prison, they don’t necessarily get the chance to do the right courses either.

The judge is looking at your record and thinks you haven’t done any courses in prison but maybe you haven’t been able to get on one in time.

How did having family support and a lawyer impact on your situation?

I’ve got a lot of family around me, so if I just call them, they just deal with everything. Where, a lot of people don’t have that. And it’s unfair.

For people without family, finding a bail address is extremely difficult, meaning they could still be detained months after the end of their sentence.

I was probably one of the first in that ‘foreign national’ prison to get out on time. Because I was on point. I had my solicitors ready. In the end I only had to spend like two days extra under immigration powers, whereas most people spend five or six months. For some people it can be over a year.

Some people are still there 12 months later because they can’t get legal teams or they can’t get approved addresses and they are stranded in a ‘foreign national’ prison.

Not even like in a detention centre, where you’re allowed a mobile phone. They keep you in a prison even though you’re no longer a prisoner.

Can you explain a bit more about the mental health impact of being detained in prison?

Some people do want to go back, but it’s really hard for people who are from here and that’s why people start to struggle with their mental health.

I met a guy who tried to kill himself who said I’m not going to another country, ‘I’d rather die here, and my kids visit my grave than going to a country I haven’t been to since I was six months old. I don’t even have my Mum and dad there. What am I gonna do?’

A lot of these guys are cutting themselves. I know someone who swallowed a blade because he didn’t want to be deported.

Even those who have only been in the UK for 3 or 4 years. Some of them were only stealing because they can’t work and they’ve been applying for leave to remain in the UK for years. It’s crazy because you’ve done something you’re getting 4 months for like theft at Sainsbury’s, but then you’re getting deported for it. These guys, they are the ones that are trying to cut themselves. Because they’ve come from really bad places some of them.

It is so, so important to know your rights. A lot of these kids are lost; they don’t even understand what they are going through. They don’t understand that they need to fight their immigration case.

Charities can help bridge the gap by helping people understand their rights.

At the end of the day someone in detention isn’t a solicitor and they might end up signing papers they don’t understand.

What is life like for people who have been granted immigration bail but are still fighting their case?

Originally they said I couldn’t work when I came out. I’ve got a daughter to feed. My solicitor appealed it and we got a letter back saying he’s entitled to claim benefits, but he’s not entitled to work.

You feel like you’re sitting at home doing nothing when you could be helping. I began volunteering because it was something to do, and I can still be helping people.

Some people are just thrown out there with nothing. What do you expect these kids to do? You’re just literally getting them ready to lose, to go through the whole cycle again. And some of them have actually done courses to help themselves to gain something when they come home, but they can’t use the qualification anyway because they can’t work. So, what is the point?

The number one change is that they need more legal aid and representation for people’s immigration cases.

And then more courses so you can reduce your risk. Then letting people work when they are released.

I want to work. I’ve done enough time and done enough courses to turn my life around. I could walk into most places and get a job now. 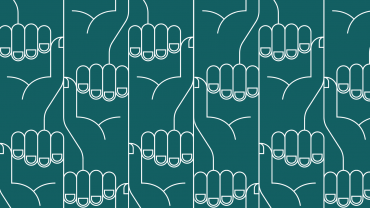