Dave Jeal, Chaplain, on what leads people to offend and the value of education in prison

No. 1 in our blog series exploring creative approaches to transforming the criminal justice system.

Can you tell us about your time working as a prison chaplain?

I’ve been a chaplain for over 22 years – first in HMP Ashfield, then at Bristol Rovers football club, and now in the Royal Navy serving with the Marines. They’ve all been working with completely different demographics.

HMP Ashfield housed young offenders and juveniles when I was there. I come from a working-class Bristol background and struggled myself when I was young, so I felt the lads were in some ways similar to me. They trusted me and I wanted to help if I could. They needed someone to believe in them. Just offering hope was my main task.

While I was working at the prison, I set up a church in one of the big council estates in Bristol, an area that was in the top ten indices of multiple deprivation in the UK. It was somewhere the lads could come when they were released and be taken care of.

What are some of the factors that lead to people to offend?

From personal experience of getting into trouble at a young age, I didn’t fit into any educational structure at all. I hated school with a passion. I’m dyslexic and most of the guys I talked to in prison had some sort of learning disability as well. Once you disengage, you’re very limited with what jobs you can go for, and you’re probably angry because you’re being told you’re lazy and stupid. Then it spirals out of control because you think, if that’s what you think of me, then watch this!

Most of the guys were not lazy or stupid at all. They just learned in a different way and were actually quite clever, but they were frustrated. We have a one-size-fits-all education system and it fails, and it makes people angry. They can’t fit into what society wants them to be, so they kick off, get arrested and feel hopeless. Then they live out their childhoods for the rest of their lives – unless there’s some break, they keep going back to it. In the Bible it says a dog always returns to its vomit. I can do that myself – keep going back and doing the same thing, even though I know it’s broken. And that’s what they’ve learned from an early age – that they will never be any good, so they might as well live that out.

It used to be £56k to lock up a young person for a year. It’ll be more than that now. How much would it cost to send them to a public school where they’d get a really good education? It’s got to be cheaper than putting them in prison. And the misery they’re causing themselves, their families and the victims of whatever crime they committed – why would you put them through that? You’ve got so many clever people that the country could tap into, and we’d all be much better off.

Everything is pushed towards the end goal of exams, and if you’re no good at them, what are you going to do? It gets passed down in families, so if the generation before you has failed in the world’s eyes, they say ‘don’t bother – that’s not for us’. My wife was the first person I knew who’d been to university. She helps me; my eyes have been opened and my horizons have changed.

When the prison sent us to America on a gangs conference, the one thing I saw in US prisons that worked was the boot camp. It gave a sense of belonging, hope and identity. Americans are very proud of their flag and rally behind it, but we don’t have that here. Not only do we have a class system, but we’re fragmented in lots of other ways too. What do we have that unites us?

What are your thoughts on education in prisons?

Not everyone is academic. We need to find out what each person is good at and focus on that. Doing something you enjoy helps in other ways too. I like knives and axes. I get together with some of the Marines where I work now, who might be struggling with PTSD, we make knives and sheaths together. They love I and I love it, and it helps them to open up.

People know if you’re a shepherd or a hired hand. You can’t kid a kidder. If you’re a hired hand – that’s your job, but if you’re a shepherd, you care for those sheep – they’re your sheep. People who actually have a passion for justice and for the people they work with in prisons – that’s what’s going to work. If you employ people who are innovative and do things a bit differently, they will attract other people who will try exciting new ways of doing things too. Then things will change. We have to do things differently because it’s not working at the moment.

People with dyslexia are highly represented in prisons. How can they be better supported?

Whether you have dyslexia dyspraxia, or dyscalculia, you need a lot of additional help. Schools don’t have the time, money or expertise to really make a difference. There’s a brilliant centre for dyslexia in Bristol, but it costs money. Specialist support should be more widely available. It is estimated that up to 85% of male offenders have some sort of learning disability – it’s not just a few people. And they’re the ones that got to prison. How many more didn’t get to prison, but are facing similar problems?

There are over 80,000 people in jail right now, costing the country a lot of money and a lot of misery. Spend it on doing something positive for those people and for the country, because they’re very bright, clever people. They’re valuable.

How does faith help people in prison?

I say to the lads, OK, so you’ve made some mistakes. Well, let’s have a look at some of the people in the Bible, and see what bad things they did. You’ve got murderers, thieves, all sorts in there. But God can use them, and he tends to use them more than the people who’ve got it sussed. I quite like things to be a bit prescriptive. Maybe that’s why I like the military. The Bible says, ‘don’t do that, because this is going to be the outcome’. It’s easy to understand and it gives you a sense of belonging.

I’ve found church quite difficult because you have to read a lot, and also it’s very middle class. When I first got involved, people would ask me to come round for a meal. I didn’t know anyone who would do that. And all the singing songs and playing music – it was odd to me. I remember once, someone asked me over for a meal and then took out his guitar and started singing. I freaked out and left. I didn’t realise it was normal in that church.

I grew up in a very, very white working-class estate. I’ve learned as I’ve grown older to be a bit more open minded, but when you come from a council estate, that’s all you know. The thing is to learn to open your eyes and find out what the world is like.

We need to stop putting people into boxes. There are some things you’ve got to conform to, like not breaking the law, but on the whole it’s good to be able to express yourself and say ‘this is how I feel’. Everyone needs the chance to be heard and told that their point of view is valid.

Veterans can be vulnerable to offending. What can we do as a society to help them?

Most of the lads are quite young in the Marines. When they leave, they’ve spent their lives being told what to do and have become institutionalised. There is a resettlement programme, but they still don’t really know how to look after themselves.

They’ve built really strong bonds and a sense of identity and belonging that they’ll hold onto for the rest of their lives. Once a Marine, always a Marine. But they may not be with other Marines and there’s this sense of grieving.

That’s where organisations like the church could do more and should do more. We’re supposed to be a community for every living soul; we’re to care for them and love them. The church doesn’t always do that very well. No matter who you are or what you’ve done, my role is to be there and help you on your way.

Do you have any final words of advice?

At HMP Ashfield I took some of the lads abroad to give them new experiences. Every year I took some to football camps in Albania. It broke their hearts. They thought they were poor living on estates in Bristol, but these guys didn’t even have any shoes and their living conditions were terrible. They were lovely people, and the lads wanted them to know that they cared about them and that weren’t forgotten. Thinking about all the guys I’ve taken on these trips, I reckon 75 – 80% haven’t reoffended again. I’m still in contact with some of them now.

Find out what rocks their boat:

Everyone has a skill that no one else has got and when they find that, they’ll be absolutely outstanding. We just need to help them find what it is and polish it. It needs to start from an early age and keep giving people opportunities to try different things.

They need something they can hold onto that’s for real – not just a concept. They need belief, to feel part of something and feel cared for. These are just basic humans needs.

Hope can help break the cycle. 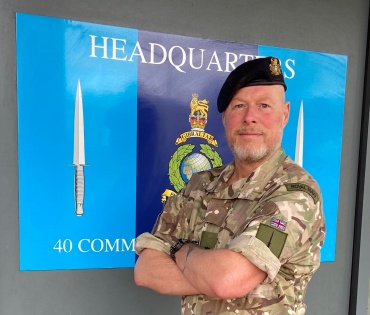