My Good Vibrations experience and why it works

Entering prison with a lengthy sentence to some is the end of the world. Although many give up and get involved with the drug culture to escape the realities of prison, others use the prison like the streets, with the aim of becoming infamous. Although society is changing, people generally still focus on personal goals like securing the perfect career and a family. But being in prison makes achieving these goals impossible.

This is why a lot of mature prisoners focus solely on settling down post-release. They often use their time productively focusing on faith, reading, studying, or finding a business or a trade through vocational courses. They will also often use the facilities within the creative space to focus on music, arts, clothing or whatever it is that interests them.

For me, I used education to rewire my mind while in prison. Rigourous studying and academia kept my mind grounded. I also focussed on music. I managed to work in the prison studio: making beats, teaching others, mixing tracks, and recording music for other potential artists in the system.

Still, being in prison wasn’t easy. My state of mind had to be strong to withstand the mental levels of one who is struggling with the pain of imprisonment and has yet to accept what they have done. And being released, too, comes with multiple tests of faith, trust and temptations. The anticipation of release can seriously affect one’s mental health. Without a strong support network, ex-prisoners tend to fall back on their old ways and look to criminality for support.

Now, parts of the voluntary sector are very astute to the struggles prisoners endure and make it a priority to support those needs. Through my experience with the Irene Taylor Trust I have got insight into the voluntary and charitable sector. As well as working with the Irene Taylor Trust, I have worked on scores of projects including the Philharmonic Orchestra, Lewisham YOI, The Prince’s Trust and with other organisations including Good Vibrations since my release.

Taking part in a Good Vibrations community project was interesting as I had referenced their projects in my postgraduate dissertation, without ever experiencing one myself. In my dissertation I spoke positively about its outcomes as my research question focussed on whether character building through prison music interventions has an impact on recidivism.

I quote from my dissertation…

“The Good Vibrations Gamelan in Prisons Project aims to inspire and empower people through creative involvement in music making and open communication. Similar to the Irene Taylor Trust, the project enthused effective-practice methods in twenty-four secure institutions in the UK, including young offenders’ institutions and secure hospitals (Wilson, 2009). Although the interventions have had a profound impact towards developing positive attitudes on inmates (Wilson, 2009), researchers needed to define whether there was any long-term financial impact of such projects. Therefore, a study was used to measure the long-term psychological, behavioural, motivational and pro-social effects on participants during the remainder of their sentence and post-release. Focusing on these cognitive functions helped the practitioners to assess whether inmates were engaging with the project, the practitioners and prison staff, and whether the intervention was successful in supporting inmates coping with life in prison and post-release. The findings not only found a positive impact on psychological, emotional and behavioural traits during the prison setting. But also suggest that months after the project, prisoners experienced more positive outcomes in dealing with decision making, rational behaviour and personal problems during the remainder of their sentence and six months post-release from incarceration (Wilson, 2008).”

For my own interest, I wanted to understand whether music interventions are only appealing to people in a less fortunate position or who have little resources, such as those in prison. Therefore, I brought someone to the Good Vibrations community project who had never been in prison before, to examine their interaction and engagement with the project and what impact it had for them. The person I invited is a friend of mine, Pav, who has never been in prison nor had any contact with the criminal justice system.

His feedback was interesting…

“On this project I felt open minded. When it comes to the music part, I am not usually good with instruments. However I felt motivated to give it a go. This also helped me realise that music can help me release a lot of stress.

“I would love to take part in this project again if I get another opportunity as it also helped me control my awkwardness around people. This felt really therapeutic as it made me realise how little things in life can make a lot of difference. In the intervention you are surrounded by strangers at the beginning, but the way everyone had different music sense and different backgrounds, everyone had their unique experiences, and we ended up leaving there like we’d been friends for a while.

“I would recommend this to anyone that deals with a lot of stress or can’t keep a clear head. I felt as if I developed a different perspective in life which will help me moving forwards.”

I can confidently agree with Pav on how the project worked well with people from different backgrounds. You could feel the excitement from others just from the atmosphere in the room. As soon as we chose our instruments everyone got into the vibe instantly.

I felt in synchronisation with others in the group, especially towards the sound and tempo, and demonstrating leadership by having the opportunity to stand up and conduct the group. It felt like creating a mini orchestra with a crew taking commands solely by following my hand signals.

As it’s all happening live, you have the ability to freestyle and change how you want sounds to fall in synchronisation. In addition, the facilitator explained the key points in the easiest way for everyone to replicate. One participant got right into the zone as he was conducting which brought a lot of fun and laughter.

As Pav said, the energy and the whole session was high spirited and positive. It felt life changing in that moment and it took my mind away from any negative thoughts outside of the music. I would certainly recommend it for rehabilitation of the mind. Also, reflecting on it months after taking part, I can feel how much an intervention like this is needed towards replenishing moods and vibrations. The energy outside of projects like these can be overwhelming.

I also would like to thank all the participants and staff involved in the project. It was a tough time and the invitation allowed me to participate with an open-minded, diverse crowd of people who appreciate music and peace. It was also great to finally participate in a Good Vibrations gamelan project after writing about it in my thesis. I look forward to projects in the future. 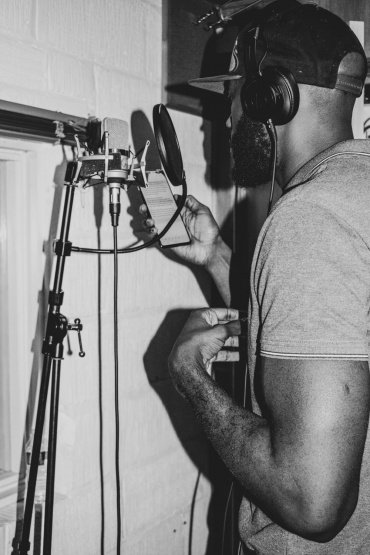