I spent most of my childhood in care. That’s where I learnt to be a criminal – it was my training ground. The other boys and the staff all said I’d end up in prison.

I had no prospects and smashing shop windows and cars was the only way I had of expressing my anger. I was in and out of prison for years. In between I’d work, but I’d always end up back inside.

In 2016 I took part in a Good Vibrations course for the first time at HMP Thameside. I’m rhythmic, but not very musical. It wasn’t what I expected. We had to carry all these ancient delicate instruments into the hall to start with – I was interested straight away. With gamelan, there’s a lot of space for people who haven’t got a clue about how to play music.

I remember there were people there from some of the other prison wings, including a couple of guys I wasn’t getting on with. There was real tension, even though it all started over a packet of biscuits. I remember threatening this geezer one minute, then the next suddenly we’re sharing a xylophone! You can’t play music, trying to find melody and rhythm, and still have beef. It’s impossible. Either the tension takes over, or the music, shared cooperation and collaboration does.

After I was released I bumped into Kieran, a Good Vibrations facilitator, at an event one day. He helped get me on a course at the Southbank, but it was too stressful to fit in so I dropped out. I was diagnosed with ADHD around that time and I think that had something to do with it. But later I tried again. I performed with other musicians at a conference using gamelan instruments and music tech, and did a gamelan and poetry course called Beyond Performance at the University of York. I even spoke and performed at a Good Vibrations board meeting.

Playing gamelan helped me learn to co-operate, communicate and experience harmony with other people. You can’t play music with someone and stay angry. I now realise I’m at my most impactful when I choose not to kick off and show compassion instead. Good Vibrations helps me on the right track.

Now I’m an actor and a spoken word artist. I’ve been in two feature films and I run workshops for charities and in prisons. You can see some of my work here www.wordonthekerb.com. When I perform, I realise I have the power to influence people. It can be very easy to lead people in the right or the wrong direction, so it has to come with responsibility. I can see the rhythm of my childhood so clearly – people around me should have been able to see where I was heading. There, I did it again – when you grow up in care it’s easy to put responsibility onto others. We can’t hang about waiting for someone to save us, we need to save ourselves. The ultimate responsibility is with me. I always try to be better today than I was yesterday. 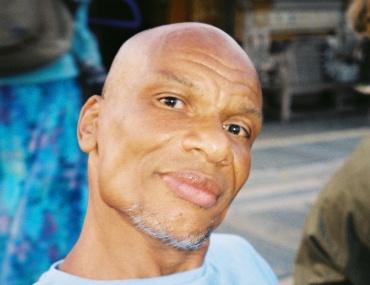