Fay, an occupational therapist, and Kieran, a Loophole Music facilitator, talk about one of our secure hospital projects and the impact it has had on one particular service user.

Fay: Dean has been in hospital for over ten years. He’s got better, and then relapsed, over and over again. He was at a point where he felt hopeless and frustrated and like he had no reason to try and get better anymore. Music was really dear to him so we decided to give him leave so he could attend a Loophole session.

Kieran: During our first session together, I quickly realised that Dean has no control over anything in his life. So, I let him go through the process that he insisted on to make tracks, even though it made no sense musically. When he listened to what he’d made, he didn’t like it and asked if we could do what I had originally suggested. Although it slowed the process, it is vital that I let him try and do it his way. The respect needs to go both ways.

Fay: That’s what made the sessions work; Kieran completely respects Dean’s artistic integrity. Kieran at no point showed any judgement over the quality of the work, which was crucial to Dean coming back week after week. Dean does this interesting thing where he throws things out that are important to him. Each week he would come in and listen to the previous week’s work and shout at Kieran, insisting that he deletes it. Kieran was so accommodating while still putting boundaries in place, explaining to Dean that he needed to respect that Kieran had also spent time working on that track. It became a very true representation of a healthy relationship in the real world.

Kieran: Throughout our sessions, I’ve definitely noticed changes in this patient, all positive ones. Like Fay says, a friendship has formed between us. Now when he comes into the room for his session he is smiling and happy to be there. He still arrives in an explosion, knowing that he’s only got a 50-minute session and there’s so much he wants to get done, but now he’s jovial, whereas the first sessions were a little more confrontational.

Fay: During his time with us, Dean has never been able to commit to regularly attending activities before. The fact that he has felt able to attend these weekly sessions – and has even looked forward to them – has been instrumental to him in other ways. There is a piece of work that he has been avoiding for years and he has now agreed to talk about it. It’s a significant piece of psychological work that he needs to complete to allow him to progress in his recovery. This is due in part to the recent positive experience with Loophole of trying, succeeding, failing and coming back to it. Dean also has a very difficult relationship with his father. Through his music, he wants to reach out to his dad to show him that he’s doing well – the first positive contact with his dad in years. Loophole has paved the way for other work to happen and for Dean to build more positive relationships going forward. 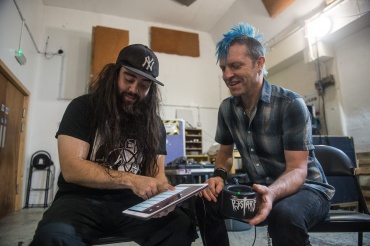